‘The poem charts my life with David Bowie and Action was carefully chosen as the place where, aged 14, I bought my first Bowie LP.” The Snork Maiden 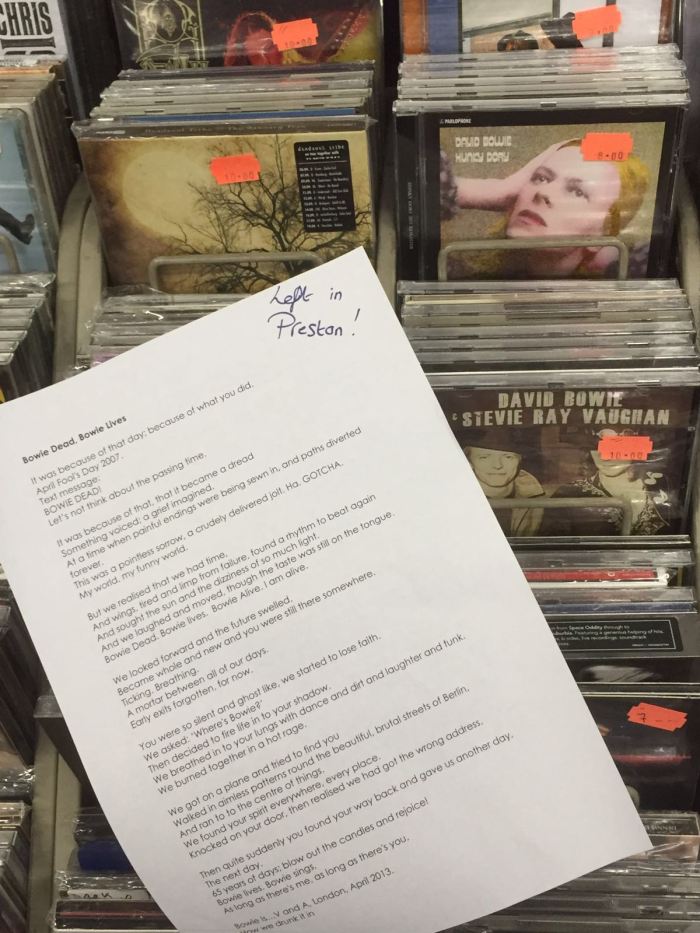 It was because of that day; because of what you did.
April Fool’s Day 2007.
Text message:
BOWIE DEAD!
Let’s not think about the passing time.

It was because of that, that it became a dread
Something voiced; a grief imagined.
At a time when painful endings were being sewn in, and paths diverted forever.
This was a pointless sorrow, a crudely delivered jolt. Ha. GOTCHA.
My world, my funny world.

But we realised that we had time,
And wings, tired and limp from failure, found a rhythm to beat again
And sought the sun and the dizziness of so much light.
And we laughed and moved, though the taste was still on the tongue.
Bowie Dead. Bowie lives. Bowie Alive. I am alive.

We looked forward and the future swelled,
Became whole and new and you were still there somewhere.
Ticking. Breathing.
A mortar between all of our days.
Early exits forgotten, for now.

You were so silent and ghost like, we started to lose faith.
We asked: ‘Where’s Bowie?’
Then decided to fire life in to your shadow.
We breathed in to your lungs with dance and dirt and laughter and funk.
We burned together in a hot rage.

We got on a plane and tried to find you
Walked in aimless patterns round the beautiful, brutal streets of Berlin,
And ran to to the centre of things.
We found your spirit everywhere, every place.
Knocked on your door, then realised we had got the wrong address.

Then quite suddenly you found your way back and gave us another day,
The next day.
65 years of days; blow out the candles and rejoice!
Bowie lives. Bowie sings.
As long as there’s me, as long as there’s you.

Bowie Is…V and A, London, April 2013.
How we drunk it in
Every exhibit archived and laid out just for us.
Because it was us that brought you back,
And made you sing again.

Afterwards we hired bikes and cycled round Hyde Park.
The blossom hung heavily on the trees,
Puffed up against deep blue city skies.
Blue, blue, electric blue.
Bowie lives, and so do we.

Your birthday cake, the best yet we said.
I decorated it with blue stardust
And the lightning bolt stood out proud against the smooth surface.
Happy Birthday Bowie. 69.
Can you hear me?

We woke up two days later to the moment already lived
But this time with no exclamation mark. David Bowie Dies.
Carried in to consciousness, an exit already rehearsed,
By both of us, but in different ways.
Fooled again and again.

I can listen to you now, after weeks of radio silence.
Word on a Wing playing in my ears; snug, private.
The train charges through changing landscapes
I watch two hares box in a patch of wasteland
A scrapyard for cars rises up; rusting, ugly, skeletal, dead.

I look down at my wrist as the sorrow leaps up.
A neat row of black shapes inlaid, just beneath the surface of my skin
Where they will always be; fragments of angels falling
Masking open hearted-pain.
Your death adorning the channels through which my life flows.